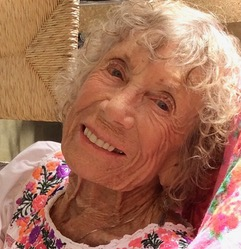 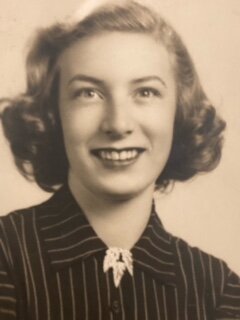 Geneva (aka Genie) Redwood Sperow was born in Oakland on April 5, 1921, to Mary Letticia Neeper and Bernard Redwood.

In 1930, as a result of the Great Depression, her parents moved Genie and her younger sibling, Paul, to Glendale, CA. She graduated from Glendale High School and went on to attend Woodbury College, earning a business degree.

She met Jack Sperow, a native of Eagle Rock, at dancing school in Glendale where one summer she and her girlfriends were helping out their dance instructor as dance partners to the other students. From the moment Jack laid eyes on Genie, he was smitten. Five years later they were married at St. Mark’s Episcopal Church in Glendale right after Jack was commissioned 2 nd Lt. pilot in the Air Force. After a very short honeymoon in Carmel, Jack received orders to return to his base for deployment on his first assignment. In the twelve years that followed, they had five children, Jeffrey, Janelle, Gregory, Jill and Julie. As the births of their first two children neared, Jack on duty at March Field, would fly over their home in Eagle Rock. If he saw the white sheet on the lawn, he knew that Genie had gone into labor. It was their signal to get to the hospital.

In 1972, after retirement, Genie and Jack moved from Eagle Rock to Aptos, along with their two youngest daughters. She enrolled in Cabrillo College and earned an AA degree, graduating with honors. Always inquisitive and adventuresome, Genie and Jack were great traveling companions, traversing the four continents, and enjoying all the people and places that they were fortunate to experience.

Genie and Jack had a love affair that lasted nearly 70 years. Genie was an accomplished seamstress, a great cook, an avid reader, a good dancer, and an involved citizen and a generous giver, and, above all, a most wonderful mother to her children. She lived her life with a strong faith in God and tried to follow Jesus. Her philosophy for a fulfilling life: live whenever possible in the present moment, be positive, open, loving, forgiving and to do so with abandon and a grateful heart.

She was pre-deceased by her loving husband and her eldest son, Jeffrey. She is survived by her four children, six grandchildren, a plethora of great and great-great grandchildren. This Eulogy was tenderly submitted by Genie’s loving children. In lieu of flowers, please donate to: forwardmovement.org and the salvationarmyusa.org. The service of remembrance will be held at St. Stephen’s Episcopal Church, Valencia, CA, Friday, November 12, 2021, 11:00am. A reception will follow at the home of Julie and Michael Cowan.

Share Your Memory of
Geneva
Upload Your Memory View All Memories
Be the first to upload a memory!